The research project “Embodiment, Intersubjectivity, and the Minimal Self” (MinimalSelf), funded by the European Commission within the Marie Skłodowska-Curie actions  individual fellowships scheme, studied the most fundamental sense of self from a philosophical and interdisciplinary perspective. Its starting point was the concept of the “minimal self,” as recently employed by philosophers such as Gallagher and Zahavi, who suppose that the minimal self is given in every conscious experience before we reflect on the experience. In traditional and contemporary debates there is considerable confusion concerning how to conceive of the most fundamental sense of the self and its relation to subjectivity, consciousness, intersubjectivity, and the embodied person. The project showed that the minimal self is integral to conscious experience rather than merely formal, that it is an important constituent of the person as a whole, and that it can only relate to the world because it is part of an embodied being that is embedded in an intersubjective community.

How we conceive of the minimal self is at the heart of how we conceive of ourselves and others. If, for instance, there is ultimately no self but only brain activity, this not only has implications for the concept we have of ourselves and others, but also for the responsibility for our actions. Many people thus rightly feel confused by claims such as that brain science proves there is no self. The project made sense of the general intuition that there is a self by arguing that there is at least a minimal self, and that it is fundamental to other concepts of the self. The project found that consciousness is structured in such a way that it connects apparently contradictory concepts, such as that of the subject and that of the embodied self in the world. By explaining the intertwinement of the minimal self with intersubjectivity, the project challenged the individualism that is so widespread in today’s Western culture and which also shapes the view of the role of the individual in society. In addition, the project showed that a better appreciation of the complexity of consciousness is pivotal to our understanding of the possibilities in which technology can handle cognition.

The project was supervised by Prof. Matthew Ratcliffe.

The project was divided into four work packages. The first engaged with the phenomenological tradition of philosophy, which provides the background for more recent conceptions of the minimal self. It was shown that Husserl’s method of avoiding the naturalistic reduction of consciousness and self brings to the fore the problem of the interrelationship between the self as a subject for the world and the intersubjectively experienced world. By explaining how phenomenology suspends questions of existence in favor of the investigation of subjectivity, the relation between the self as a subject of experience and the self as an embodied being in the world was clarified.

The fourth work package explored the consequences of the concept of the minimal self for debates of public interest. The project showed that the belief that there is no self is flawed, that philosophical questions about the most basic sense of the self are fundamental to the comprehension of human consciousness, and that scientific investigation can also contribute to questions concerning human identity. A further exploration focused on questions of the role of consciousness in relation to artificial intelligence. This is not only an important topic for tech companies but also one of increasing concern for society as a whole.

Workshop Perspectives on the Minimal Self 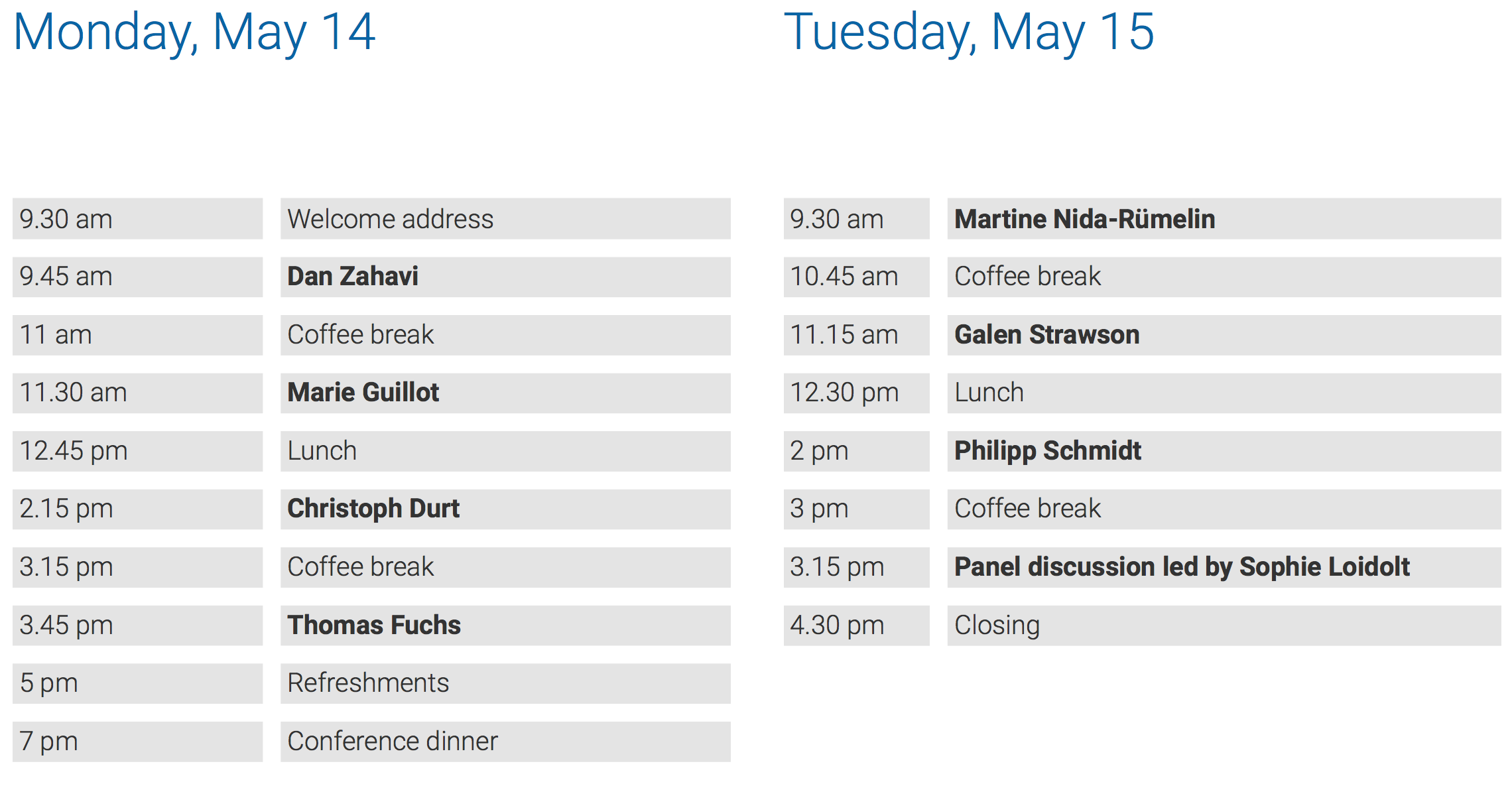 Workshop The Paradox of Subjectivity

Seminar The Self: Contemporary Philosophical Perspectives

Please click here for general information and the reading list. All other information for students is to be found on the University’s moodle page.

Discussion of the Minimal Self in Embodiment, Enaction, and Culture 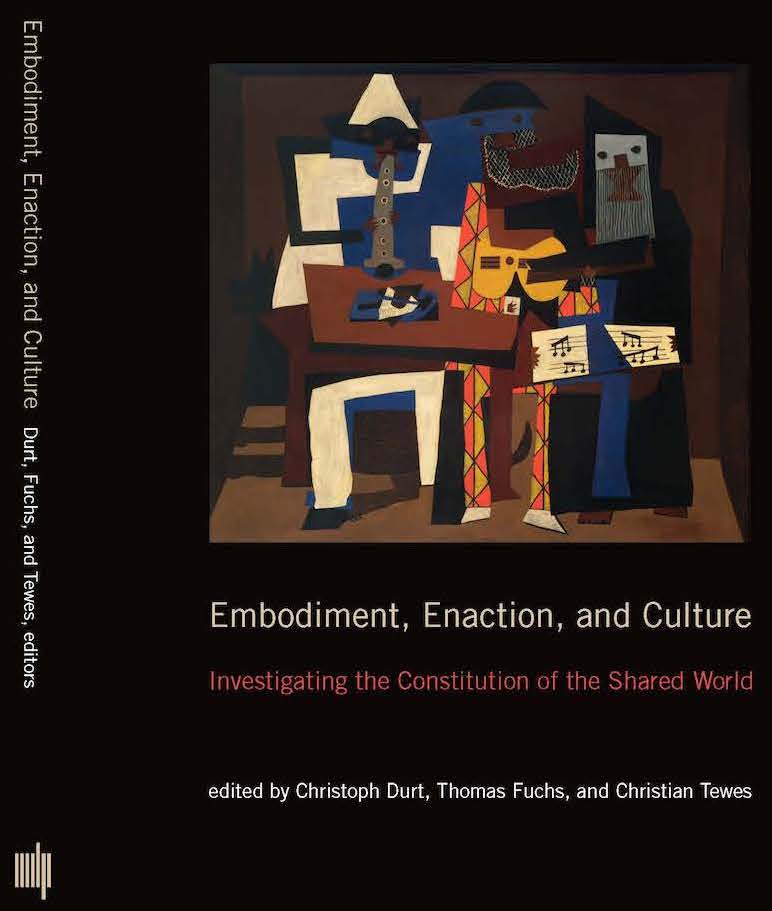 Part 2 two of the edited volume discusses several aspects of the relationship between minimal self and intersubjectivity. If the most basic forms of the self are already embedded in intersubjectivity, one may think that there is no part of consciousness that is not impregnated with culture. But is there not something in the self that precedes all intersubjectivity? Dan Zahavi (2014) maintains that there is a “minimal self”; every consciousness experience has a character of mineness. Together with Brinck and Reddy (this vol.), he defends the claim that individual experience is not preceded by we-experience. In contrast, Matthew Ratcliffe as well as Anna Ciaunica and Aikaterini Fotopoulou argue in their chapters in different ways that even the “minimal self” needs to be conceived in intersubjective terms, a challenge taken up again by Zahavi in his subsequent response.

In the first chapter of part 2, Ingar Brinck, Vasudevi Reddy, and Dan Zahavi consider some arguments that could be adopted for the primacy of the we, and examine their conceptual and empirical implications. The question of the relation between the collective and the individual has had a long but patchy history within both philosophy and psychology. They argue that the we needs to be seen as a developing and dynamic identity, not as something that exists fully fledged from the start. The concept of we thus needs more nuanced and differentiated treatment than currently exists, distinguishing it from the idea of a “common ground” and discerning multiple senses of “we-ness.” At an empirical level, beginning from the shared history of human evolution and prenatal existence, a simple sense of prereflective we-ness, the authors argue, emerges from second-person I-you engagement in earliest infancy. Developmentally, experientially, and conceptually, engagement remains fundamental to the we throughout its many forms, characterized by reciprocal interaction and conditioned by the normative aspects of mutual addressing.

Matthew Ratcliffe addresses the view that schizophrenia involves disturbance of the minimal self, and that this distinguishes it from other psychiatric conditions. He challenges the distinction between a minimal and an interpersonally constituted sense of self by considering the relationship between psychosis and interpersonally induced trauma. First, he suggests that even minimal self-experience must include a prereflective sense of what kind of intentional state one is in. Then he addresses the extent to which human experience and thought are interpersonally regulated. He proposes that traumatic events in childhood or in adulthood can erode a primitive form of “trust” in other people on which the integrity of intentionality depends, thus disrupting the phenomenological boundaries between intentional state types. Ratcliffe concludes that a distinction between minimal and interpersonal self is untenable, and schizophrenia should be thought of in relational terms rather than simply as a disorder of the individual.

This intersubjective constitution of the self is explored further in the next chapter, by Anna Ciaunica and Aikaterini Fotopoulou. They ask whether minimal selfhood is a built-in feature of our experiential life or a later, socioculturally determined acquisition, emerging in the process of social exchanges and mutual interactions. Building on empirical research on affective touch and interoception, Ciaunica and Fotopoulou argue in favor of reconceptualizing minimal selfhood so that it goes beyond such debates and their tacitly “detached,” visuospatial models of selfhood and otherness. They trace the relational origins of the self back to fundamental principles and regularities of the human embodied condition, such as the amodal properties that govern the organization of sensorimotor signals into distinct perceptual experiences. Interactive experiences with effects “within” and “on” the physical boundaries of the body (e.g., skin-to-skin touch) are necessary for such organization in early infancy when the motor system is not yet developed. Therefore an experiencing subject is not primarily understood as facing another subject “there.” The authors conclude that the minimal self is by necessity co-constituted by other bodies in physical contact and proximal interaction.

In the following chapter, Dan Zahavi responds to the critique of the concept of the minimal self by Ratcliffe and Ciaunica and Fotopoulou. Zahavi acknowledges that the discussion of the minimal self has entered a new phase with the foregoing chapters, not only because they engage with the recent arguments of Self and Other (Zahavi 2014) but also because their criticisms differ from the criticism offered in the past, for example, by advocates of a no-self view, narrativists, and phenomenal externalists. Rather than denying the existence of the minimal self, the critiques published here are concerned is with its proper characterization and interpersonal constitution. Zahavi maintains, however, that the minimal self is not interpersonally constituted. He argues that it can coherently be defined more thinly and independently of interpersonal aspects of the self, for which it is the condition of possibility.

Progress beyond the state of the art, results, and potential impacts

The project progressed beyond the state of the art in several seminal respects. It showed that the concept of self is much more fundamental to science and philosophy in general than commonly thought. The self is often presumed to be a rather special issue that can be treated independently of questions concerning the rest of the world. But since the self comprises a perspective on the whole world, its investigation is interwoven with the question of how to conceive of the world it relates to. Not in spite of but because of the minimal self being a very thin notion of the self that does not comprise personal traits, its conception has far-reaching consequences for the understanding of the interrelationship between consciousness and the intersubjectively shared world.

The project revealed that the minimal self as a subject of conscious experience stands in a more difficult relation to the self as an embodied being in the world than usually thought. The two concepts even seem to name two categorically different kinds of self, yet they must be the same self. Going beyond interpretations that allege that the difference can easily be resolved, the project showed that it is already present in the dual directedness of consciousness. Furthermore, new light was thrown on Husserl’s late account of the confusions that stand in the way of a clear understanding of consciousness. Contrary to the prevailing interpretations, it was explained that to gain a clearer understanding of the self as a subject of experience, it is insufficient to refute reductive naturalism, and that a clear account of the relation between the self and the world is also required.

In addition, the project led to an application of questions concerning subjective and intersubjective understanding and introduced the concept of “cognitive technology,” which is technology that can either understand or simulate understanding of meaning. It was shown that it is insufficient to think of cognition in terms of calculation, and that cognition rather requires a conscious being that has a perspective on the world, i.e. a self in a minimal sense. This is especially the case when it comes to creative rule-following, such as in open exchange in ordinary conversations, and requires a fundamental rethinking of questions of human cognition and sense-making. On the one hand, this is relevant for debates of public interest concerning the use of artificial intelligence, which is having an increasing impact on society and economy, while on the other it is relevant for the development of technology that processes and potentially “understands” meaning, such as in future forms of natural language-processing and machine-learning.

The project has further potential impacts on other issues of public interest. In public consciousness, the lack of understanding of selfhood expresses itself in the belief that there is in fact no self, that we are simply determined by our drives, or in a vague feeling of the impossibility of self-determination. Understanding the most basic sense of the self is fundamental to questions such as the relation between ourselves as conscious beings and other humans, animals, and nature, the potentials of agency and freedom, and the possibilities of understanding others not only by finding oneself in the other but also by respecting others as genuinely different conscious beings. A better understanding of the most basic sense of the self thus has a profound impact on, for instance, trade and cooperative solution-finding in an increasingly globalized world that is challenging old concepts of identity. 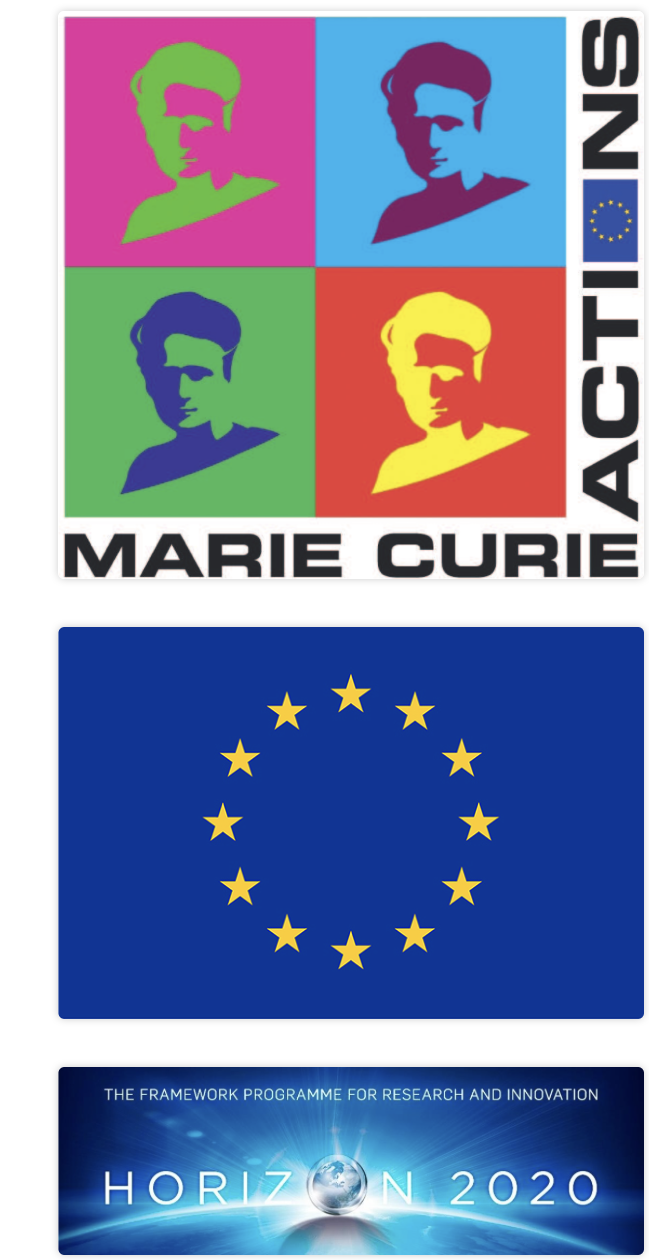